Writer/director Ana Lily Amirpour’s The Bad Batch brings to fruition a radical and nightmarish view of the margins of America, exploring the limits of survival and human understanding, in this dark adventure-romance, with a soaring musical score. It's an epic quest movie, a psychedelic western, a pop-fairy tale, set in a desert wasteland where human-eat-human has become a way of life for societies rejects.

Amirpour sees the film as a love letter to America nestled inside a modern-day spaghetti western: "It’s a psychedelic western because it’s not set in the Wild West, it’s kind of modern, almost current time, almost calling back to the 90s and 80s in some ways, and 70s even. I think America kind of has that. The weird thing about America is that if you leave the major cities, it’s a big country of just land. And if you leave a major city and drive even for half hour, or two hours, you’re going to end up in some strange towns that are stuck in past decades."

Amirpour sent many of her crew members Westerns to study before the production began to give them an idea of what she wanted her film to look like, including El Topo, and Once Upon A Time in the West. According to director of photography Lyle Vincent, "We looked at a lot of westerns again, especially Leone, and Once Upon a Time in the West. Also David Lynch, Wild at Heart, especially." The film is also inspired by the big adventure-romance films of the 80’s like Romancing the Stone, and The Princess Bride.

Her creative vision was the main driving force behind the film and its talented cast. "I get to bring a dream space to life and invite very carefully selected people into that place, and I just want them to be there, to be completely molecularly, cellularly, swallowed whole. To feel it, to smell it, to hear the music, and to be relaxed and to have fun," says Amirpour. Suki Waterhouse, who plays the film’s protagonist, Arlen, recounts Lily’s vision and her dedication to filmmaking, "Lily is the most passionate person I’ve ever met about what she does. And she just loves it. And that is infectious like passion is infectious. It’s like you can crawl the walls of passion."

Keanu Reeves joined as the eccentric founder of The Bad Batch’s Comfort community, echoes "She’s got such a great passion, vision, and again it’s what’s in her head, her body, her soul and her feeling, and what she wants to say," adding, "she’s got intensity to her, a real intensity, which I appreciate.."

Amirpour spoke highly of her camaraderie between her cast and her crew members, particularly among her director of photography, Lyle Vincent and camera operator Scott Dropkin: "You just get in this like thing together between the three of us, where it’s just like, unspoken, awesome, kind of like, it’s like you’re in a war, those are your people right by your side, because you’re charging Normandy. You know, that’s who you want, they have your back."

Vincent and the crew reciprocated those feelings stating, "She’s an amazing creative leader. She knows what she wants, and she sets out to get it. And she won’t stop until she gets it. And she inspires everyone. She doesn’t like to hide behind the monitor, she likes to get right on set, likes to be right next to the actors. She’s involved with everyone creative, from focus pulling to obviously actors, and the camera operation and the lighting, everything. She’s an inspiration to everyone."

"Being good or bad mostly depends on who you’re standing next to."
– The Dream


At the beginning of the film, we meet Arlen as she is being exiled into living among the titular bad batch. Before she can travel very far, she is hunted down and captured by two members of the bridge people. After being tortured, which includes the severing of several limbs, Arlen escapes and winds up in the town of Comfort. "It’s pretty intense," Waterhouse says, of her role and what it required. "But I’m really keen on the physical stuff of it." Amirpour recalls the night she met Suki and asked her to play Arlen, explaining what this role would demand of her, "I told her she was going to suffer, physically, mentally, suffer, more than she could imagine. It’s an action movie, with stunts, and prosthetics, shooting in a decayed hot desert, no frills, all pain. And I told her this right up front, to see if she would commit all the way, and she did. She’s a true warrior. And beyond that she has a magic about her that can hold your attention no matter what she’s doing.

While Arlen is living in Comfort, she wanders out of the walls of the town and meets Miami Man, who is enchanting to her but also puts her in grave danger. Miami Man serves my purpose," says Waterhouse. "I’m completely lost and he serves as my solution to have a meaning in this new place where I’ve come and lost my identity. It’s that love/hate thing." Similar to her previous films, the role of music and sounds become a character in and of itself, for Amirpour music is, "such a crucial element to being creative for me, or just being a human being. I think for a movie, a song feels like a character or a place or a scene, and, sometimes I hear a song, and I just want to create a moment in a film for it to exist, so I think it’s almost kind of like scoring the film to the music, and most people kind of do it the other way around." Amirpour used music to get the actors and crew members in the right mood to film a particular scene.

Production of The Bad Batch proved to be a non-stop battle with the weather, in particular extreme heat and dust storms. Amirpour attests, "there were windstorms. There was a lot of wind and dust and storms…there’s like three kinds of worlds: there’s the junkyard world, and then there is the desert, and then there is Comfort, which is the town that we shot in. So each town had its own element and personality and the desert was definitely dust storms." She adds that when these would occur, adjustments had to be made: "But there’s always surprises. Constantly. Like the dust storms, you know, you’re picturing the scene and it’s going to be a certain way, and then suddenly it’s like a fucking monsoon of dust. And you’re like, okay, it’s going to be a monsoon of dust. And then that becomes a part of it."

The setting of Comfort and the surrounding area became an overarching element to the set. Assembling a desert junkyard oasis, Amirpour challenged the cast and crew to use the vast emptiness as a catalyst for their roles. Playing Comfort’s resident DJ Jimmy, Diego Luna attests, "It’s crazy, it’s an amazing world to be a part of. You arrive there and the whole atmosphere and the whole universe exists. It’s beautiful for actors I guess, you can just be, and interact with what’s around you," adding, "It’s a crazy world, but it makes you, I mean, they didn’t have to build it you know, it’s here."

Playing Miami Man, Jason Momoa describes the setting of Lily’s "fucked up fairy tale" stating, "I think the greatest stuff to shoot in is the difficult stuff. I don’t like, boring, natural, I’ve never really shot inside a studio before. But I think, when you’re going through hell, it’s amazing, and it’s going to look amazing. We’re a very small crew so it’s great because everyone’s real intimate, and I like that you can move quickly, and be out in these elements. There’s nothing out here, it’s beautiful watching the sun come up and then set. It’s fun because you’re just like, wow, surreal." 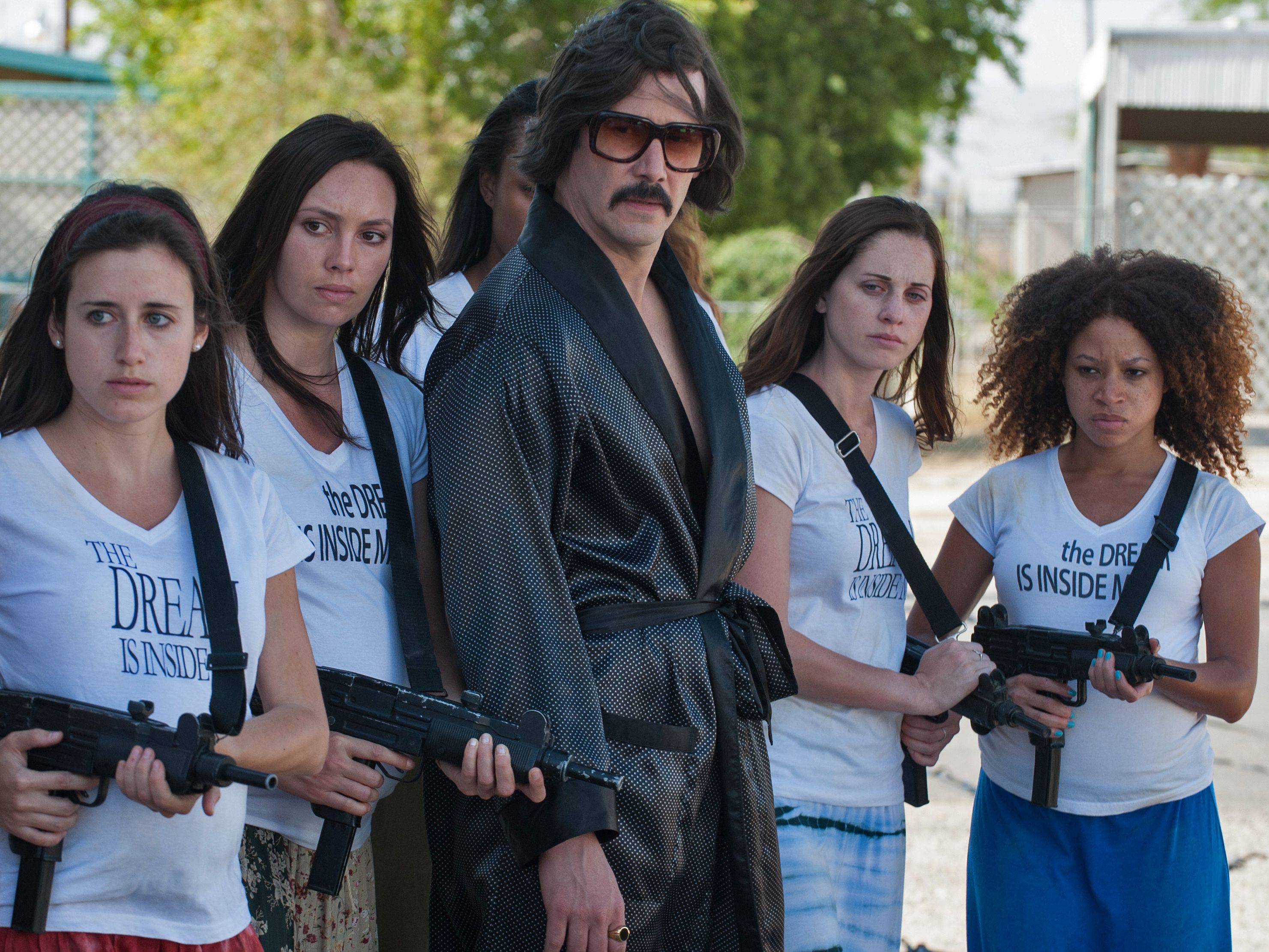 The world of The Bad Batch would need to be populated with America’s rejects. Amirpour wanted to represent the real people who live in the surrounding desert, off the grid, and in varying degrees of poverty. This required hiring extras from these decayed corners of America, many of whom, don’t have phones, and live in trailers in the middle of the desert. "We have a lot of background that are local people to the area who are not the usual background you would hire in a shoot in New York or LA," says Second AD Kamen Velkovsky. "They’re local people who live in trailers, completely off the grid." Amirpour spent months in the year previous to shooting, visiting areas near the Salton Sea, including Slab City and Bombay Beach, and developing friendships with the locals, who became a key part of the visual fabric of the world. "In the end I think those people connected to the whole idea of being "The Bad Batch", it was an idea they bonded with, they felt there was truth in it," Amirpour observed, "and I think it shows in the film."

"The chaos of this world is vast and unknowable. We like to think we can understand it, control it, but we can’t. Never have, never will. Don’t plague yourself."
– The Dream