Now that the awards season is finally upon us, it’s easy to note one glaring omission amongst all the nominees: Roadside Attractions’ "I Love You Phillip Morris". After a long and bumpy road trying to secure a U.S. distributor (not only was the film ignored at Sundance because of its explicit gay content, but once the movie did find a distributor after being re-edited, its release date was pushed back multiple times in the U.S. before Roadside Attractions came in to save the day), it’s unfortunate that—at least for those who worked on the film—"I Love You Phillip Morris" wasn’t worth the wait.

The film has rolled out quietly in theaters across the U.S. over the past few weeks, and perhaps that’s part of the reason why movies like "The Tourist" and "Burlesque"—both contenders for awards at this year’s Razzies—were laughably included amongst the nominees for the 68th Annual Golden Globe Awards. While the film, or more specifically its star, Jim Carrey, had some quiet Oscar buzz following Phillip Morris’ premiere at Sundance in 2009, all that died down by the time the movie was finally released in the U.S. last December, going against some stiff competition as "Black Swan", "The King’s Speech" and "True Grit" with little to no fanfare. Although the 16th Annual Critic’s Choice Awards did acknowledge the film as a Best Comedy nominee ("Easy A" took home the trophy), Carrey’s memorable performance was sadly overlooked. While there’s still a chance Carrey might be a surprise nominee at this year’s Academy Awards, Steven Russell has a better chance of escaping prison for the umpteenth time than Carrey does at taking home the gold. 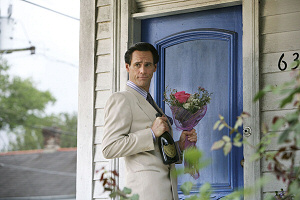 
Based on real-life events, "I Love You Phillip Morris" tells the amazing but true story of Steven Jay Russell (Jim Carrey), a flamboyant white-collar criminal who falls in love with fellow inmate Phillip Morris (Ewan McGregor) while incarcerated at the state penitentiary. Reminiscent a bit of 2002’s "Catch Me If You Can", the film follows Steven as he repeatedly breaks out of prison to be reunited with the man he loves once Phillip is freed, and shows the drastic measures Steven would take to prove to Phillip that, while everything else in his life may have been a lie, his love for Phillip was always real.

Although Carrey shines as Steven Russell and makes the character someone audiences want to root for rather than see behind bars, oddly enough, it’s Ewan McGregor’s sweet, naive portrayal of the film’s titular character that steals the spotlight. McGregor is simply irresistible as Phillip Morris, and audiences will instantly sympathize with his character—so much so that there are times where Steven Russell briefly seems like the bad guy he should be. But, just like Phillip Morris, audiences quickly forgive Steven for everything he’s done and fall for the lovable con man all over again. Carrey and McGregor have a chemistry together that’s rarely seen on-screen amongst actors of the opposite sex, let alone two actors of the same sex pretending to be gay, and their chemistry helps make Steven and Phillip’s relationship seem that much more believable. Although audiences may never understand just why Steven loves Phillip so much (Phillip wears his heart on his sleeve, so it’s easy to see why he falls so hard so fast), it’s not something that ever once distracts viewers from the story being told.

While the script by John Requa and Glenn Ficarra ("Cats & Dogs", "Bad Santa") may have its faults, overall "I Love You Phillip Morris" (based on the novel of the same name by Steven McVicker) balances comedy and drama flawlessly. There are times where viewers may find themselves laughing as hard as they did in "Liar Liar" (the scene near the beginning where Steven comes to terms with his homosexuality after almost losing his life in a car crash may at first be startling, but eventually ends up being one of the funniest moments in the film), then there are other times where they may find themselves shedding a few tears. Regardless of what emotions one feels while watching the film, "I Love You Phillip Morris" is never once not entertaining, nor is its gay sex scenes ever distracting. In fact, the sex scenes are so few and far between that one wonders just how the film was originally cut, as it’s hard to see how anyone in this day and age could be offended by the movie’s gay content. Plus, a lot of times the sex scenes are played for laughs; the scene with Steven and Phillip slow dancing in their cell is far more intimate than the scene where Phillip performs oral sex on Steven—although, again, the slow dancing scene ends with a laugh as well. 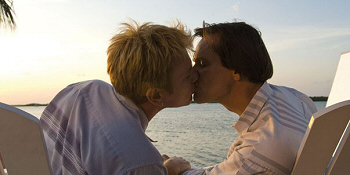 Probably the biggest disappointment with "I Love You Phillip Morris" (besides how overlooked the film has been) is just how criminally underused Leslie Mann is in the movie. Always a great addition to any cast, Carrey’s former "Cable Guy" costar plays Steven Russell’s ex-wife Debbie, and it would have been great to see the two of them share more screen time together. For the most part, though, Mann is simply the woman on the other end of the phone, and the few scenes viewers saw in the film’s trailers with her are pretty much all the time they get with Mann on-screen. Given "Phillip Morris'" relatively short running time (98 minutes), it would have been nice if a few more scenes were written into the film to develop Steven and Debbie’s complex relationship, but it’s understandable why Requa and Ficarra wanted to focus on Steven and Phillip’s relationship instead.

While "I Love You Phillip Morris" may not be the film to earn Carrey his long-overdue Academy Award nomination (or McGregor’s, for that matter), that doesn’t mean he isn’t deserving of it. Carrey takes a chance with "I Love You Phillip Morris" and successfully manages to deliver a performance that’s both heartfelt and hilarious—sort of like "The Truman Show" and "Liar Liar" rolled into one. Even though the film is now playing in additional markets across the U.S., it might still be a bit of a struggle to find, but for longtime Carreyholics and fans of good movies in general, "I Love You Phillip Morris" is definitely worth searching for.