With all the rumors swirling around Jim Carrey lately, one thing remains true is that "Dumb and Dumber 2" is still going to happen. Speaking to Digital Spy during a UK press tour for him and Peter's recent film version of "The Three Stooges", Bobby Farrelly dropped some hints about what we can expect from the upcoming sequel to the 1994 comedy blockbuster.

He mentions that he wants to start filming in the spring of 2013 once Jeff Daniels finished his commitments for the hit HBO show "The Newsroom". He also mentions that he's aiming for a fall 2013 release date. Finally, he gave us what we might think is the official plot of the movie. 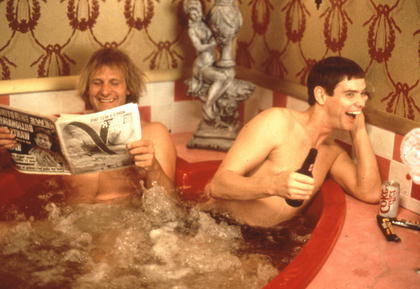 "I can tell you that there is no growth out of either one of them and its 20 years later. What is funny about the original is that they're grown men who are complete losers and when the studio came to us about a sequel, we were like, 'Loads of kids are losers and they're dumb.' We didn't see any value in the sequel so we backed out of it, but now these guys are in regular life and they're still basically children at heart. The story revolves around the fact that one of them may have sired a child. They want to go and find the child because he's having a kidney problem and he wants to ask him for one of his kidneys."

So it may seem that either Harry or Lloyd has become a father, and it involves a kidney transplant. Stay tuned for further updates.