The directors and screenwriters for Kick-Ass have had a interesting conversation on Twitter yesterday. As we reported last week Universal showed interest in Jim Carrey as 'Colonel Stars' for the upcoming superhero movie "Kick-Ass 2", and now it seems that Jim has accepted the role!! Read the conversation below.

Pre-shooting began in London on August 23 and the "Kick-Ass 2" production team are now moved to Toronto for shooting when it begins on September 7 with Jim Carrey. 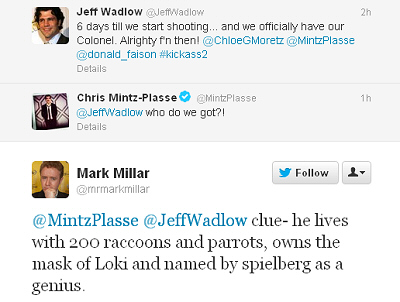