Since Canada's main sport is hockey; it's not a surprise that Jim Carrey is a huge fan of that sport. He has been at many games and last Sunday (April 27th) was not a exception.

Jim attended the game 5 between the Philadelphia Flyers and the New York Rangers, at the Madison Square Garden, New York. 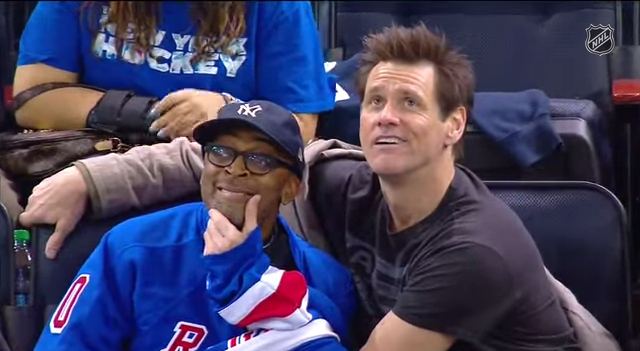 During the 1st period break as the camera focus on many of the people watching, they soon realize that Jim was also part of the crown:

"When he was first shown on the scoreboard, Jim Carrey had a rally towel covering his face. Then after he revealed himself, the crowd erupted. From there, Carrey had people laughing by raising his eyebrows one at a time.

While still on the scoreboard, Carrey gave a peace sign with two fingers, then he raised one, which perhaps was his way of saying the Rangers are No. 1."

Jim was sited next to actress Susan Sarandon and movie director Spike Lee and during the 2nd period break Jim made the crowd laugh again and this time Spike Lee joined the joke… maybe unwilling.

Check out the video to see the amazing moment:


That man definitely knows how to move a crow and we at JCO we'll keep you updated as news move as well.