We find it a bit sad that tribute shows are a rare thing to happen but when they do, it's always for a good reason.

Carol Burnett is a comedian, singer and writer who marked a generation of people, including young comedians, such as Jim Carrey. Jim actually sent a letter to her show once when he wwas just 10 years old to apply to work there and was nicely turned down.

On December 3rd, CBS will air a special to celebrate her 50th Anniversary of her show. Many colleagues and friends will attend, including Jim Carrey.

The special will be filmed in near future at the "Stage 33 at CBS Television City in Los Angeles, the show's original soundstage. In it, Burnett will reminisce about her favorite sketches, Q&As with the studio audience, guest stars, her memorable wardrobe and bloopers, as well as the effect the show continues to have on television today as a true pioneer of sketch comedy." 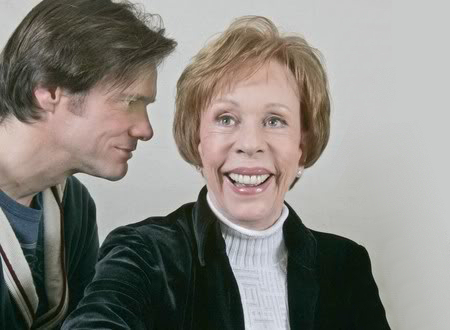 Last time Jim and Caroll Burnett worked together was for the animation "Horton Hears a Who!" and they were seen a several shows afterwards to promote it.

We are glad to know about this tribute and we can't wait to see it!