The second time Jim got emotional was when he talked about his mother. Jerry mention to Jim that there must have been some art in his life and that's when Jim's talks about his childhood, father and mother talent:

"I do what I used to do when I was a little kid and that was like from the age of five till them. I spent most of my time in my room I did go out and play but my room was heaven to me and that feeling of like I'm gonna figure out the universe in here. I'm going to do some poetry and then try to get it published by Mcgraw-Hill Ryerson and I'm gonna get on The Carol Burnett Show so I'm doing impressions and coming up with stuff like that and art and if someone interrupted my drawing when I was a child I would have a conniption and break things because I was in the womb and it really is that for me so during this period of time there's a terribly negative effect of these kind of people and this kind of corruption and greed taking over there's also a beautiful effect because artists come to life, artists do the greatest work of their lives when they're trying to reach people you know and so that's a beautiful thing and I'm right back as soon as I put a pencil on a page right back at 8 years old. I'm 8 years old again only now I'm dealing with something really serious but in a way that that keeps me in my youth. I felt really gifted by it . (…) The amazing gift of this whole thing as well is that and pardon me if I get misty here but my father who was an incredible clown an amazing human being who if you've talked to him for five minutes you knew him for 50 years it was just your friend you know and do anything for you and just lovely incredible funny I watched him perform and I sat back and I went that's a good thing to do and wrapped people in our home every time they visited you know and they would leave with pee stains and go Percy my dad's name was Percy which makes you funny immediately but they would leave going you missed your calling Percy you missed your calling and he handed me all that talent and that stuff and that ability to perform and that was him and I lived with that for thirty years before this passion this childhood passion came back of painting sculpting and everything else and I realized one day I went right in the middle of creating something that oh my gosh [Jim emotional moment] I'm with my mother now that's it I'm getting to spend time with her because she soused to get up in the middle of the night and take these pastels out and have her private world in the middle of the night without three kids screaming at her and she would get lost in her little paintings of tigers and giraffes and things she put up in our room the next day and it was her peaceful time and she had a great talent for it and I realized that my gosh I get to spend like I'm getting the benefit of the greatest you know energy from both parents both of them gave me these incredible gifts and so I really look at it like as time with my mother."

Now the audience got a chance to take a look at a few of Jim paintings and he explain them to the audience as well as talked about the current politics and the people he supports. 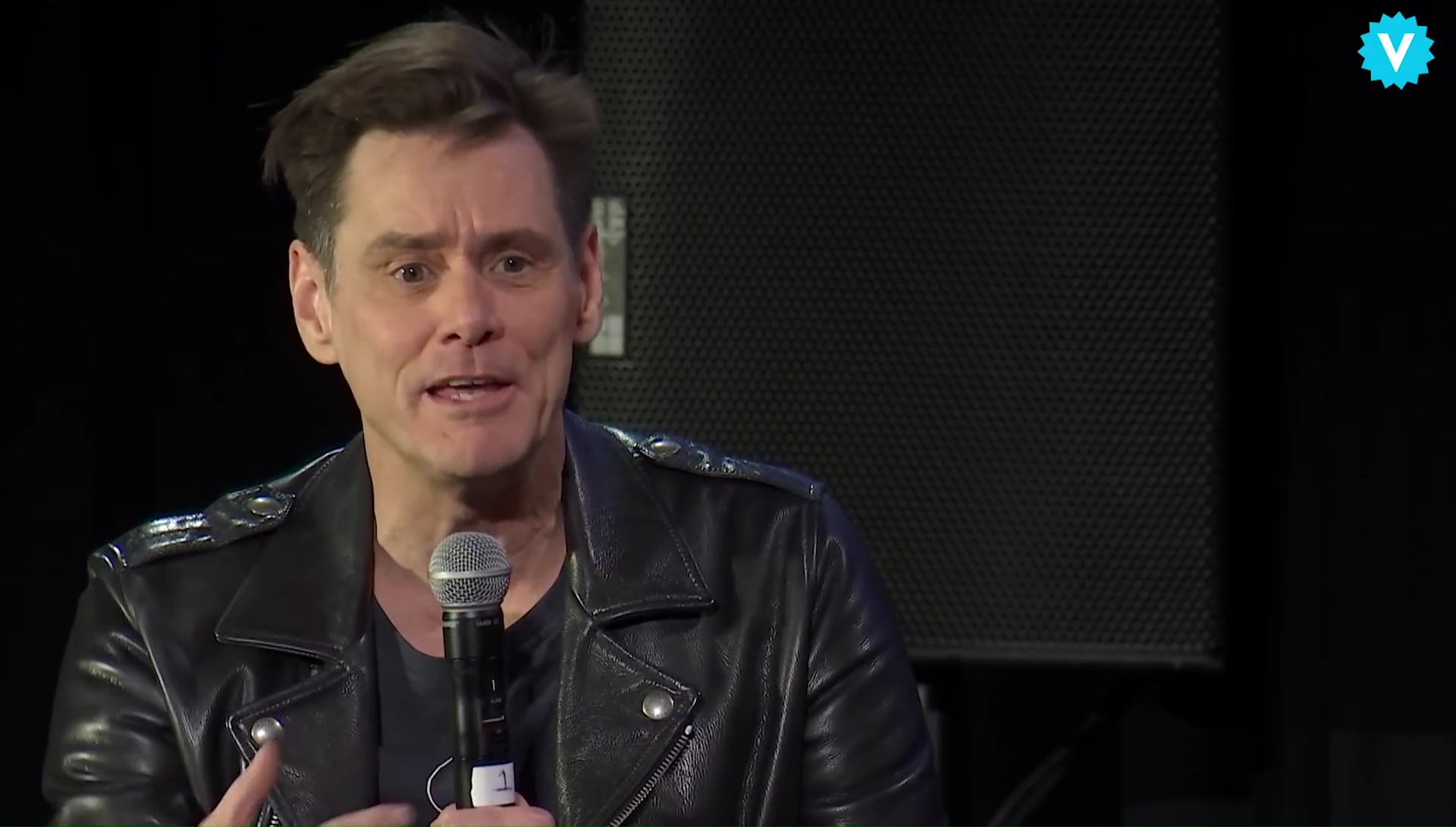 Jerry also asked if Jim had look at cartoonist like Robert Crumb (R. Crumb) work and not only Jim had but also he end up telling a story about him:

Robert Crumb is interesting because I I did not think of myself as being affected by him but I did enjoy his work very much. (…) He is just a fantastic stylist and incredible and I got to tell you a R. Crumb story that just flipped me out because a couple of months ago somebody a friend sent an article about R. crumb that he had, that I was in his life. 15 years before he had dreamt about me on like The Tonight Show and I was doing stand-up comedy in his dream and it wasn't going so well and suddenly I just stopped and became silent and didn't move like this like the film had frozen and he said it was the longest time him sitting there going Jim Carrey's frozen is it the filament or whatever what's it gonna do is he's gonna do something crazy is and then in the dream he said my eyes just started rolling up and down and back and forth like that and down and back and forth like this, until the audience was in stitches and he said he woke with the idea that this is a tremendous exercise for his eyes as he had poor eyesight so he adopted it as an exercise that he did every single day of his life he did the Jim Carrey dream eye exercise, isn't that incredible? It's a little odd but my ego likes it."

The last cartoon shown was of the Colin Kaepernick and the Nike logo, situation. Racism is still a problem and for Jim there's no excuse for it. The cartoon also shows when Jesse Owens - a black man - won the Olympic and aggravated Hitler:

"There was a big show-off moment for the Aryan race, yeah, and he just kicked their ass and that's what they're afraid of and that was a beautiful moment in history but you know it sickens me that we still have to be there how long have we existed? How long have we existed we still can't get over each other's fucking skin color? Who are we? African-american people gave me my career! They gave me my break. They encouraged me and welcomed me and that's how they are, the african-american community has incredible grace in the face of this cancerous hate. They're unbelievable I don't know how

"Instagram is owned by Facebook. I will not be on Instagram. We need to stop these billionaires from destroying our culture. They have no conscience whatsoever and what they did in the 2016 election is just unconscionable and should be punished. I don’t think it’s enough to go “Okay, let’s just regulate them.” We need to regulate them for sure. It's proving to be you know somebody we can't count on so we have to do that but also just the billionaire culture in general I mean I don't want to hate on anyone, but you know what? I'm sorry, a billion maybe I can go there but after that shouldn't you be working for the country, shouldn't you be putting it into the country, into people who need it education things like that? Why can't we take care of ourselves? Elon Musk wants to make a rocket ship to Mars. You better make room for the billionaire's men cuz if they stick around here much longer this way their heads are gonna be on sticks."

The conversation end with Jim:

"Thank you so much I'm so grateful to you thank you!"