On Tuesday we told you about Jim Carrey's talk at the 'Clinton Global Initiative' conference, a humanitarian initiative set up by the former US president.

Joined onstage by various aid organisation spokespeople and experts in their field, Jim was there in a serious capacity as founder of the 'Better U Foundation', adding humanitarian to his growing list of accolades.

He began his talk with a summary of his primary aim, to bring about the global awareness of SRI, or 'System of Rice Intensification' farming. Admitting that he isn't a farmer himself he joked "I'm not a farmer, but I grew a few plants in the 70's until my parents caught me."

His passion for the cause was clear and holding up a visual aid, the audience and his peers on stage were noticeably impressed. Looking at the production improvements in Madagascar and Haiti Jim drew audible gasps from the audience when he quoted the statistics, 50-150 percent more yield while using 50 percent less water, 90 percent less seed and no fertilizer or pesticides. 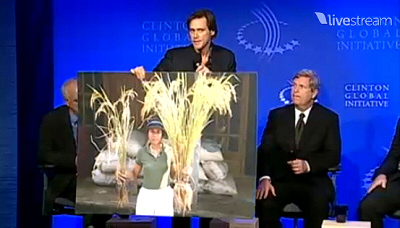 In 2005, I established the Better U Foundation with the goal of promoting transformational and sustainable ideas that can improve the lives of people around the world. One innovation that has captured my attention is a revolutionary yet simple methodology known as the System of Rice Intensification (SRI). In a nutshell, SRI produces over 50-150 percent more yield while using 50 percent less water, 90 percent less seed and no fertilizer or pesticides.

For the past five years, I have been committed to learning as much as possible about SRI and have dedicated resources to its promotion and expansion. In partnership with Cornell University, the Better U Foundation has also funded and established the SRI International Network and Resource Center, which conducts research and strives to educate farmers, development practitioners, policy makers, and many others in the promise and potential of SRI.

I may not be a scientist, but I know a great idea when I see it. Since its humble beginnings in the 1980s on the African island of Madagascar, SRI has spread to 40 countries and has been endorsed by presidents, prime ministers, leading conservation groups, and agricultural scientists. The practice has thrived in some of the harshest climates the planet has to offer. The SRI method includes planting young seedlings earlier, planting single seedlings, utilizing wider spacing, avoiding flooded soil, ensuring soil aeration, and using organic fertilizer. Most importantly, SRI has proven to be more resistant to droughts, cyclones, typhoons, and pests, and is readily available to farmers with no additional costs. 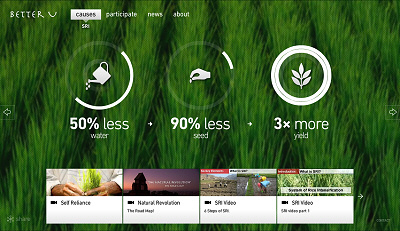 The collateral environmental and thus human benefits of SRI are equally impressive. SRI soils are healthier, dramatically reducing methane and nitrous oxide, both contributors to greenhouse gas emissions. Additionally, there is no pressure on slash and burn deforestation. Communities using SRI have also seen health benefits associated with the reduction of standing water, including lower rates of malaria and dengue fever and gynecological benefits to women who no longer sit in flooded fields to plant rice.

The 150,000 farmers trained in SRI in Madagascar alone are a testament to its efficacy and sustainability. It has been a revolution in the lives of those farmers who, thanks to SRI, now produce enough food to feed their families throughout the year, have some left over to sell, and from these earnings can afford to send their children to school.

More than a billion people today rely on rice as a main source of food. This number will certainly rise in the coming years with the expected growth of the world's population. Greater demand for foods such as rice will come at a time of increasing pressure on the earth's resources -- a time when our soils are becoming less fertile, our streams and rivers more polluted, and our forests more threatened. Improving agricultural productivity, particularly for resource-intensive crops such as rice, will be a critical factor in securing food for the world's population. SRI is an important part of the solution.

Today I am excited to address the Clinton Global Initiative in New York City on the success and future of SRI. The Better U Foundation is committed to sharing the exciting news about SRI and ensuring that its dramatic early success is only the beginning. With the goal of empowering others by supporting transformational and sustainable ideas, the Better U Foundation is committed to cultivating a better universe.