Later this month, between October 23 to December 1, you will be able to see 80 of Jim Carrey's cartoons displayed at the Maccarone Gallery. The exhibit is called "IndigNation" and will mark the first time his artwork is publicly showed.

LA Times sat down with Jim for an interview in a suite at the Beverly Hills Hotel. To start Jim describe his state of mind:
"I'm a big whale - I got barnacles. When I'm around, you smell an island. Hey, if you smell land where there isn't any, you'll know Jim's about. 'He sees himself as the great white whale.'"

In the last two years we have seen Jim's artwork on Twitter voice his opinion about politics and the current Presidency, through the cartoon he shares. He describe why he makes them:
"I get furious. Somedays, you feel like you've fed the dinosaur. But at some point, the truth has to tip over in the win column. And right now, the truth is taking a beating. Right now, we've got liars and salesmen, people who want to single us out because of the color of our skin. We've got policies based on skin color in 2018. Christ! It's incredible to me. Right now, it's an extraordinary thing to see. Blatant dishonesty is just accepted by 40% of the country."

Jim has never been afraid to voice his opinion and when he's asked about the animosity that Trump supporters have for Hollywood and their complain about the Presidency, Jim isn't shy:
"Tell them 'Your [expletive] president is a reality-show host! If I ever decide to run for president, you're [expletive]! I can't, because I'm Canadian. But if they ever decide to change that rule, I'll murder you bastards!"

And his response to criticism over the Sanders drawing? "The tradition of political cartoons is that they are not meant to flatter the subject. I draw my cartoons and express my anger in a positive way." 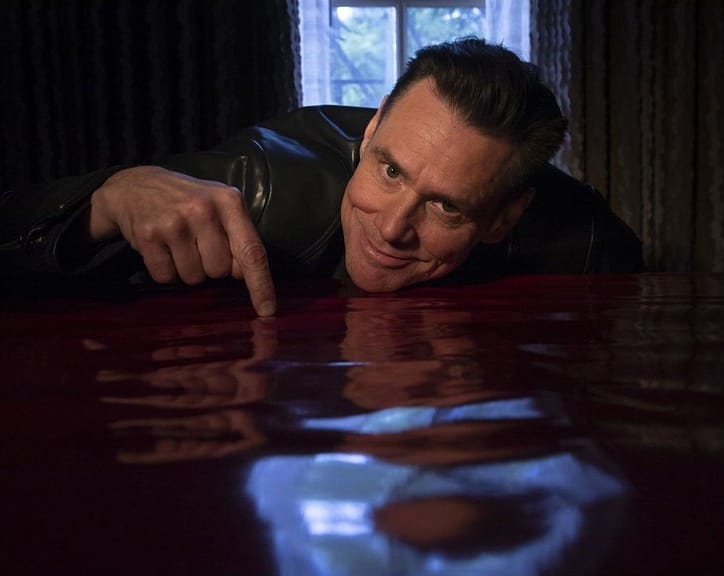 Jim stayed out of the spotlight for a few years and he explained why:
"I didn't want to be in the business anymore, and I didn't have to struggle with that because I had already left it. I'm not in it, I'm not a part of it. I'm beyond red carpets. There's just so many things happening now. The creativity, where it used to be just focused in one direction, is now just spilling out in a ton of different directions. I don't really feel like in control of it as much as I'm riding it. I'm being drawn, I'm being painted, I'm being acted. All of these things are happening."

"Kidding" marked Jim's return to TV and for him it became an easy decision:
"This show fits into my growth, what I'm feeling, wonderfully. The universe works in unbelievable ways for me. Something happened at a certain point, perhaps one or two years ago, where I was healing from some serious stuff. Everything appeared to be not so weighty. This part came to me because I needed to act this. I needed to understand grief. It's also a beautiful story. The most [messed] up thing about our society is that pain is seen as a symptom of a negative thing. There are movements of life. People die."

The role proved to be a bit of a challenge. "It's never easy - emotional stuff is never easy. First, you must act the happiest you've been in your life because something amazing is happening to your character. Then you must go back and play a scene where you're screaming your lungs out and banging your head against the wall and you're at the bottom of the pit. And it's in the same day or you start the grieving or the outlandishly emotional scene in the morning and you must shoot it all day. from every angle. You have to shoot all the other people's angles as well. So all day long, you have this thing in your mind that got you there. So you're sitting on the sidelines and people are coming up to you saying, 'Man, this is great. I really love what they're doing in there. How's everything going with you, man?' And you're like fanning the gas pedal. Vrrroom, vrooom! You're just spinning in this thing that's allowing the pain to flow. It's a very strange thing with your life. My God, what a thing to do to yourself!"

One of the key attractions for Carrey with "Kidding" was getting to work again with director Michel Gondry, who he worked with in "Eternal Sunshine of the Spotless Mind":
"It's like Michel and I never stopped hanging out. Just a lot of fun, artistic stuff."

Personally and professionally, he's experiencing what he refers to as a "subtler high" than at the height of his fame:
"I'm ready to do it again in a way that I understand better. I'm not a Hollywood thing. I don't think of myself as a celebrity. I'm a lucky guy that people know. Thank God, it gives them a good feeling when they see my face."

It gives us more than a just good feeling Jim and we can wait for what will come next.