A week ago we told you that Jim Carrey attended the New Yorker Festival and today we have a video to show which the official website of the festival shared.

Jim is looking very handsome in a black jacket and brown pants and shoes and his haircut for the "Sonic" filming.

In this part of the interview he talks about his father:

"I have to tell you about my father because he is one of the greatest humans ever. He was a musician and also just the funniest guy on earth. Rodney Dangerfield would be like "how's your dad man, that fucking guy is hilarious." First time he ever met him after like a minute he said who the fuck is this guy? He was my champion, absolutely my champion. (…)"


Jim is showed a clip of himself doing impressions on a show. After that he's asked if he has added knew characters or if he done with it:

"Yeah, I don't have a great desire, but if I'm on Saturday Night Live or something like that, that's the wondrous part about that kind of stuff is that I can employ that talent which I don't generally get to do. It's been a growth situation where I get to a certain point where people go oh my god you're really great, that's what you are! And I go, nope. I'm something different and because I want to constantly be you know fashioning new limbs to this avatar. I get a lull in popularity and a little bit I kind of go away and I learn a new swing and this time I learned how to paint and I learned how to sculpt and I became a political cartoonist for some reason."

He also talked about Ace Ventura when he's asked about a time when he mention he based a character on a bird. Jim stands up and demonstrates the Ace Ventura walk and shouts "Alright then!" to a cheering crowd.
The story of Jim's 10 million dollars check is also mentioned:

"(…)And so I used to go up after doing three comedy clubs a night I'd go up to the top of Mulholland Drive and sit on the side of the road and look out at all the lights and dream up my life and dream myself a millionaire and uh, a great artist and someone who's work would last and keep introducing itself to people again and look what happened, it was amazing. I went up there recently and I tried to do it again and I got a ticket. I got a ticket and I just started laughing when the cop gave me the sixty dollar ticket. You have no idea what a great investment this place is. But uh, anyway, I made myself a check for ten million dollars for acting services rendered payable to the date of Thanksgiving 1995 and I put it in my wallet and it slowly deteriorated over the next four years and six months before the date was due I made ten million dollars on a film and uh, yeah that was incredible, yeah. You gotta work though. You actually got to walk through doors when they open and show up 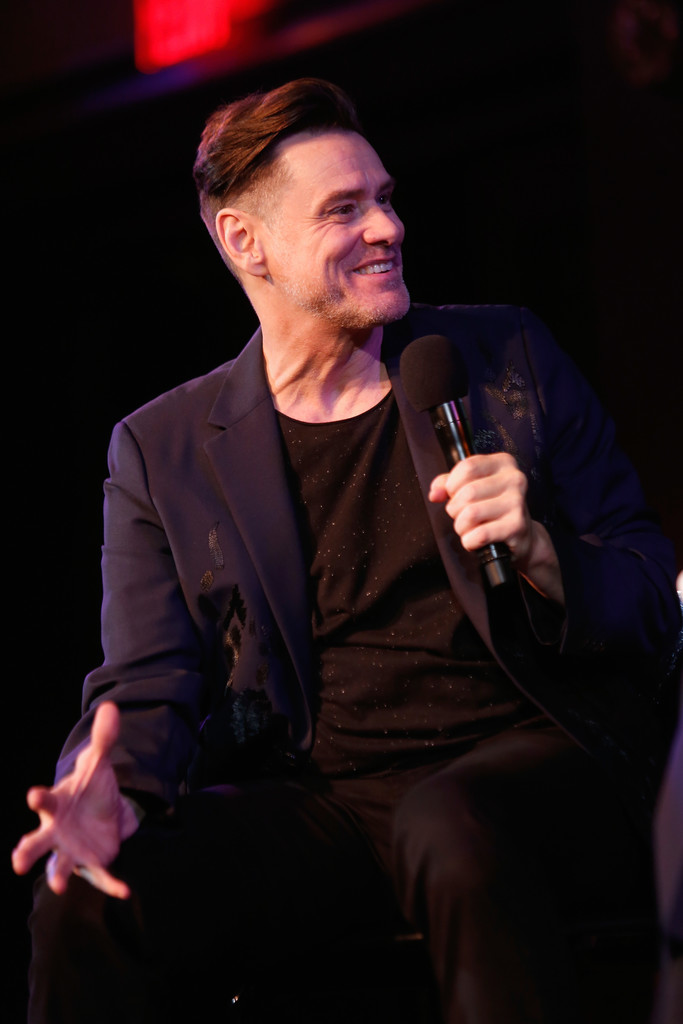 They show a slide of some of Jim cartoons and afterwards they allow audience member to ask questions.

In the video we only got to see one, but instead of a question he learns the man in the audience is a comedian and a fan of Jim who had the request to take a picture with him. And Jim said yes!

We appreciate Jim for being thoughtful to fans. Beautiful interview interview and we wish we could see the full thing.