Jim Carrey knows how to deliver a good speech! The perfect dose of seriousness and comedy is one of his specialities.

Last Thursday, Jim was a presenter at the Palm Springs International Film Festival Film Awards Gala to give his friend Peter Farrelly the Vanguard Award for his movie "Green Book". The movie is Peter Farrelly's first solo directing movie and the story is a blend of comedy and drama, something that life itself also is.

Jim walked to the stage by the sound of an instrumental version of "Cuban Pete" and delivered a speech to both congratulate and salute Peter, making the audience laugh as well. 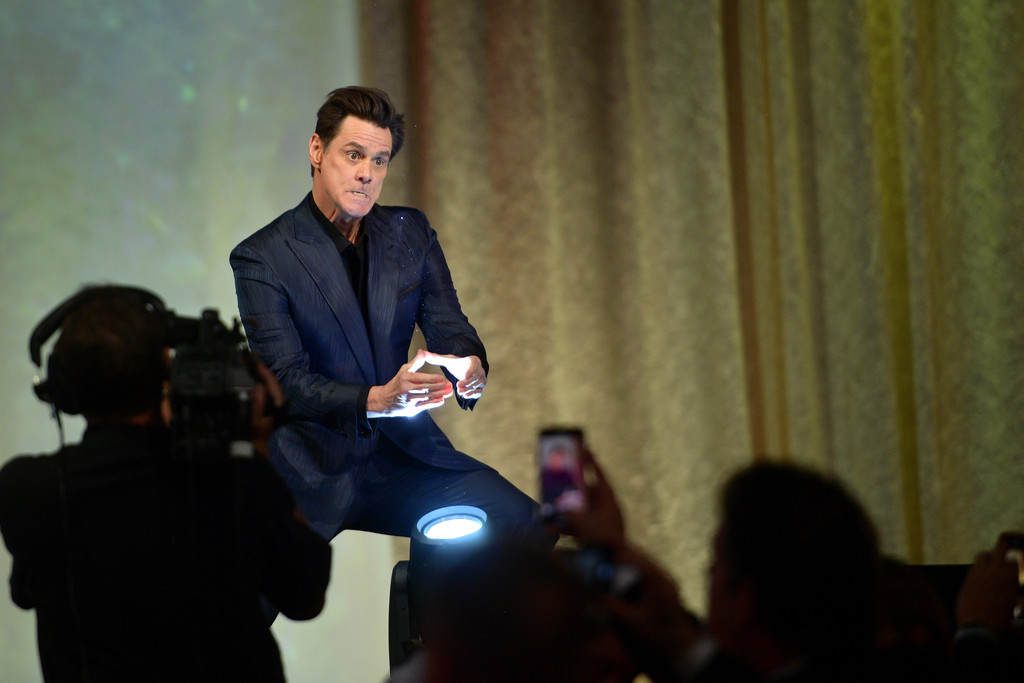 "All right. You got that look on your faces. Like the shit's about to get serious. I want to start this evening, first of all, for projecting by projecting my voice. Hello. Uh, I'd like to take a moment before we begin to close our eyes and meditate on the year that just passed. [Jim yells several times in fear and shock] Maybe not. Thank God, it's 2019! I love the illusion of newness. It's also the 25th anniversary of the Great Pete and Bobby Farrelly's "Dumb and Dumber".

That's right. Yeah. Yeah. Uh, a movie about two people, two guys who when, uh, put in a modern context really don't seem all that dumb. Yeah. Things are different. In any case, even Harry and Lloyd knew that when people of all cultures get together and are made to love each other, they're all realizing that they're made of the same stuff with the same desires and the same dreams and even Harry and Lloyd knew that when they picked up those migrant workers, they were all going to be singing the same song. What was it?

Oh, I fucked it up. Look at that. I screwed it up. I screwed it up, dammit. Oh, well. Uh, it feels good though because they're movies have always had this absurd joy. It's always pervaded everything and friendship and love. And now Peter branching out to do something on his own with a stellar cast and a wonderful script, has succeeded not just in bridging comedy and drama, but in revealing them as best buddies on a wild road trip through life. Pete Farrelly knows that the great easier of pains is the sharing of experience. That's why this new film "Green Book" was like water in the desert to me, it was like sustenance. Yeah.

Like sustenance in the moral and ethical dustbowl of 2018. Yeah. It's a story about learning at long last to see each other as human beings. It's an invitation to trade the tyrannies of tribe and genetics for the miracles of compassion and inclusion to deepen our understanding of the human family and reap the benefits of it. You should see me twerk. Woo!

I feel personally blessed, first of all, to have been included into, as a member of this divine family called the Farrelly's. Uh, one of the biggest and most welcoming families I've ever known. Pete, I'm here tonight to celebrate your divine gift and for effecting in collecting souls and your wonderful film. Let's all take a look. This worthy recipient of tonight's vanguard award."


We love this man!