Yesterday Jim Carrey attended The White House Easter Egg Roll and while there he was interviewed by ABC's Michael Strahan for the morning talk show 'Live with Kelly & Michael'.

Jim was teasing the co-host and interviewer Michael (former Super Bowl Champion) with his hands while he was being introduced. He asked him about he has been at the White House before. Jim replied that it's his first time here and he is imbued with incredible sense of power.

The co-host further asked him about easter traditions, if he had some since he belongs to Canada. Jim joked and said yes he did - used to run naked to the woods and force buddies to lay eggs.. 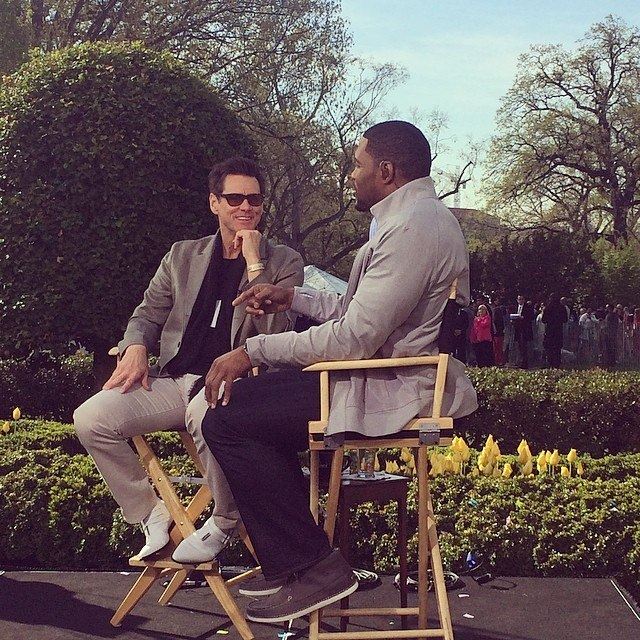 Michael then asked Jim if he ever had been to an easter egg roll and he replied that he has never been before. He used to hide eggs and eat lots of candies as a kid. He also liked hollow chocolate bunny and that's why he is all hollow inside!

The interviewer was excited to tell Jim that he is so happy that he is making a comeback as Lloyd Christmas in "Dumb & Dumber To". He was asked what's it like working with Jeff Daniels. Jim replied that he felt like his character Lloyd had never been gone. He (Lloyd) exists inside him and is a real human being now, the most selfish human being. He also told that Daniel's butt cracks out 90% in the movie!

Michael was also amazed that Jim is a grandpa with his 4 year old grandson, Jackson. Jim said that he is here with Jane and doing things which he likes for example, writing the children's book, etc, so that he leaves things behind with his family which they will remember him for that someday. He wants to leave something to remember for his family.

At the end of the interview Jim talked a little about his book How Roland Rolls and that Jackson was the inspiration behind it. He was present in the white house and is out of control around there and pretty hyped up on sugar.


What can we say? The man is just amazing!

We at JCO will keep you updated on more Jim’s awesomeness as it comes.