Skip tracer Tommy Nowak (Clint Eastwood), a bounty hunter hired to track and capture people who have skipped out on bail. One of the best in the business, he often fools his quarry by adopting a variety of identities; however, Tommy more than meets his match when he's assigned to trace Lou Ann McGuinn (Bernadette Peters), a young mother whose bumbling, no-good husband Roy McGuinn (Timothy Carhart) has involved her with a counterfeiting ring run by a white supremacist group. Lou Ann skips town, takes her baby and her husband's beloved vintage pink Cadillac - which, she learns, has $250,000 stashed in it--and heads for her sister's home in Reno, pursued by the white supremacists. Fully intending to bring her back, Tommy instead falls for Lou Ann and ends up helping her retrieve her kidnaped baby and outfox her husband and his racist cronies.

Jim Carrey's character is an entertainer who appears 10 seconds. Jim is doing a Elvis Presley impression the way he was doing in his comedy routines. 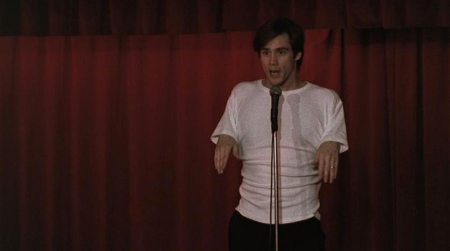 
It takes a real man to bring in a lady in a pink Cadillac.